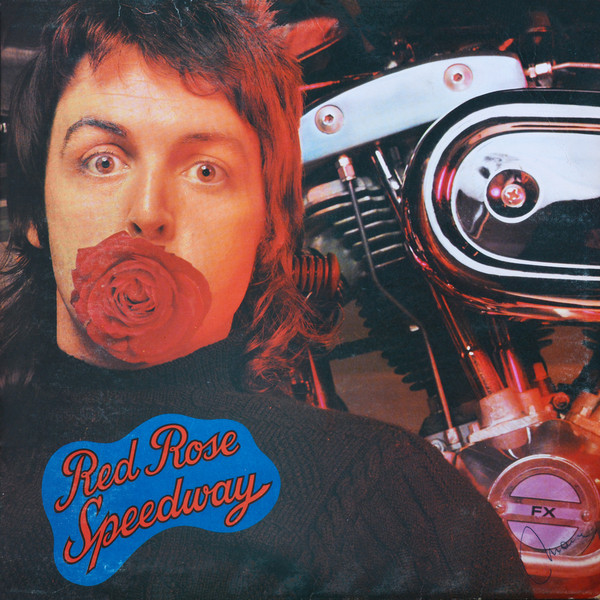 History: For their second album, Wings made two changes. One was adding guitarist Henry McCullough and the other was changing the name of the band to “Paul McCartney and Wings.” The latter change was made with the thought that Wild Life was unsuccessful because people didn’t realize Paul was on the album. Red Rose Speedway was originally planned as a double album, but shortened down to one LP on EMI’s insistence.

My own personal history and initial prediction: There’s a bar in Houma, LA that specializes in ultra kitschy decor, a mix between psychedelic and science fiction items mostly, that has the cover of this album displayed in one of the stalls of the womens bathroom. I’m assuming they chose it just because it’s so delightfully weird. I’m fairly confident I know “My Love” and I enjoy it though I wouldn’t call it one of my favorites. Beyond that, none of the other song titles jump out at me as anything I might have heard before. If they’re anything like that song, I assume I’ll at least find this fairly enjoyable even if I don’t love it.

Review: I’m not sure if it’s the addition of McCollough to the group, or just the fact that they actually rehearsed these songs before recording them as compared to Wild Life, but I feel like Wings really solidified and became more of a band on this album. Musically it all feels a lot tighter, the lyrics are getting better (or at least feeling less rushed), and the three part harmonies are on point. It’s obviously not 100% recreating the Beatles sound, but there’s elements here and there that are reminiscent of some of Paul’s Beatles songs while also moving forward in to a 1970s sound. Its main problem is that it starts off really strong and gets a bit weaker as it goes on.

“Big Barn Bed” is a fun, bouncy tune that really puts those harmonies on display toward the end of it. “My Love” is a great ballad. I appreciated it more listening to it again here. Just a great song, an understandable number 1 single. It’s Paul returning to those love songs he’s truly good at. “Get on the Right Thing” balances that ballad feel with a little extra rock and roll with strong results, and “One More Kiss” is a good country tune, even if its lyrics are ridiculous. If she’s kicking you to the curb, man, I doubt she has any interest in kissing you one more time.

The title “Little Lamb Dragonfly” confused me the moment I saw it, and that’s because this is really more or less two songs, one talking of the little lamb and the other the dragonfly. It’s not an awful combination, but I do think a little more thought into maybe choosing two animals that are more similar to each other, or even just picking one and sticking with it, finding a way to link the lyrics together better would have made it a stronger song.

The second side of the album is even more of a mixed bag. The backing vocal echoes of “me too, me too” on “Single Pigeon” are a nice effect, and the harmonies are particularly great on “When the Night.” These two are followed by “Loup (1st Indian on the Moon),” which is essentially an instrumental track. There are technically vocals on it, but no lyrics. There are some synth sounds included which give it that spacey feel, and even some atmospheric background noise that reminded me of some of the things I would hear on Nine Inch Nails records. This isn’t industrial, mind you, it just has that wonderful kind of moody, meandering quality to it.

Following this track is a four song medley, which has none of the strength of the Abbey Road medley. The first two songs, “Hold Me Tight” and “Lazy Dynamite” are more or less little snippets that he repeats over and over since he clearly couldn’t make a full song out of them. “Hands of Love” and “Power Cut” feel more complete and good just as they are at their length. While listening to this I thought of They Might Be Giants’ “Fingertips,” a 21 song medley that ends their Apollo 18 album. Most of those “songs” are only a few seconds in length, little snippets that are strong for what they are and don’t need to be anything more. I have a feeling Paul would be great at creating something like that, but unfortunately since this is the 70s and CDs don’t exist yet, he’s stretching them out to fill out his LP.

It’s a shame the album ends on such weaker notes, because there really is more good than bad here for me. I’ve also listened to the other songs that were originally planned to make this a double album. It’s interesting that they seem to add a bit more country, which would have definitely made the album a little more varied in mood. It also would have let Denny Lane take the lead for at least one song, and would have followed in Wild Life’s footsteps by including one cover song. I feel like it probably would have pushed up the rating of the album as a whole for me, just because it means more polished and complete sounding songs, making those messy medley numbers more of a footnote.

Singles that were released around this time:

“Hi, Hi, Hi” – What a strange song. It’s sexually suggestive but in ways that make no sense whatsoever, so it comes off sounding like someone who doesn’t understand sex trying to ask you to go to bed with them. Musically it’s a fun song, very high energy.

“C Moon” – I seem to average one “I don’t know if I like this or not” per Paul album lately and this song fills that need for this round. It kind of feels like Paul maybe smoked a little too much before recording this one.

“Live and Let Die” – A classic. I debated on whether I should cover the entire Live and Let Die soundtrack since it’s George Martin, but since this song seems to be Paul’s only contribution I decided against it. I’ve always thought that the lyrics are such a strange juxtaposition to Paul’s generally more peaceful nature, but of course they make sense for a James Bond film, and since it was the title of the film first, Paul had to write lyrics to fit it. I love the way it starts out quiet and builds with the orchestra. It’s really good.

Next Time: We return to see what George is up to with Living in the Material World.