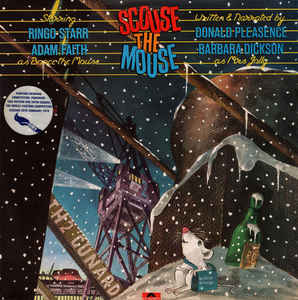 History: As I mentioned in previous review, Polydor Records were not too happy with the performance of Ringo’s records on their label and decided to fulfill the last of his contract by having him appear on this ensemble children’s record. The story was narrated and written by Donald Pleasence with songs primarily by Roger Brown. Besides Ringo, it also features Barbara Dickson, Adam Faith, Lucy and Polly Pleasence (Donald’s daughters) and Rick Jones.

My own personal history and initial prediction: When I first found this list of post Beatle releases, this title jumped out at me, since it was obviously so different from everything else. I had never heard of it before now, but given Ringo’s later work in children’s television I was interested to give it a shot.

Review: Right off the bat this album made me smile with the song “Living in a Pet Shop.” It’s simple and catchy, the lyrics as you might expect about how he’s a little mouse living in a pet shop hoping to have someone bring him home. The people singing as cats and dogs in the background chorus are a really cute touch. From there the album largely alternates between Donald Pleasence providing us with some story details, occasional dialogue from Ringo and the rest of the cast, and more songs.

Scouse is a Liverpool mouse who is adopted by a family of musicians. At first he can only speak in animal, but he watches television and learns to speak like humans. He dreams of being a famous singer himself, and another mouse named Bonce tells him that the best way to achieve his dreams is to go to America. This despite the fact that he just saw the family he lives with (The Jollys) on television singing and playing instruments. So Scouse takes Bonce’s advice and sneaks on to a ship, and it’s just a lovely coincidence that the Jollys also got on board that ship. Scouse reveals his singing ability to the youngest Jolly and they invite him to come on stage with them. He wants to be friends with the ship’s cat, but of course this is a story about a mouse so the cat is a villain and drops him down a dark chute into the sea, where he is rescued by a seagull and makes it to America after all. I was kind of surprised at how much the story revolves around believing in yourself and achieving the great American dream for an album made in Britain and never released in the U.S.

As far as the songs, most of them are what I would call pleasant. Simple and clever tunes that were definitely primarily made to appeal to children, but also not to be so annoying that their parents would be wanting to hide the record to make it stop. Ringo takes the lead for the majority of them, being the star, and he does a good job, though I think the more upbeat tunes are better suited to him than some of the slower ones. He just ends up a little flat in places sometimes. Barbara Dickson is probably the other highlight of the album. I was not familiar with her work before, but now hearing that she performed the songs for the musical John, Paul, George, Ringo… and Bert makes me want to search out that recording now. Her voice is beautiful and well suited to the folk songs she performs. The only song I didn’t care for was “Snow Up Your Nose for Christmas” and it’s mostly just because Ben Chatterly is doing that typical kid’s singing voice that tends to grate on my nerves.

I definitely think this is the kind of thing Ringo was well suited for in general. As a warm, funny, and sweet person it makes perfect sense that he’s had the career that he’s had in children’s entertainment, whether singing, narrating like he did for The Point! or being a host like he was for Thomas & Friends and Shining Time Station. While I feel like the story of this one sort of goes off the rails toward the end, it’s still a cute tale and I’m glad I gave it a one time listen. It’s a shame it never got adapted into an animated film like was originally planned, because I think a bit of trippy 70s style animation would have helped give it a longer life than it had.

Next Time: Wings is back with London Town.