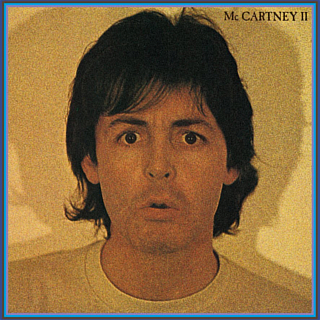 History: Wings’ world tour was brought to an abrupt end when Paul was arrested for marijuana possession in Japan and spent 9 days in jail. After that time Paul returned back home to his farm in Scotland and began playing around again in his home studio. Linda provided some backing vocals but otherwise this was once again an album done 100% by Paul himself.

My own personal history and initial prediction: I’m very familiar with “Coming Up” and its rather silly music video, and have always enjoyed the song for its quirkiness. I’ve also heard “Waterfalls” pretty recently and was initially surprised when I heard it to hear the lyrical resemblance to the TLC song. The first McCartney album is one of my favorites that I’ve listened to for this project and so I have high hopes for this one as well.

Review: I remember marveling at how the first McCartney album was labeled experimental but sounded simply ahead of its time. For this second endeavor, it is very strongly both of those things. While there are a handful of more traditional sounding songs on here, there is a lot of noodling and playing around with synthesizers. There’s an absolute Talking Heads influence on here, and having recently watched The Sparks Brothers documentary (and knowing that Paul chose to dress as Ron in the “Coming Up” video as well) I hear a bit of Sparks influence on some of the tracks too.

A lot of these tracks are instrumentals or nearly instrumental, just Paul exploring different moods and grooves with the synth. And then you have ones like “Temporary Secretary” or the original B side “Check My Machine” where he’s clearly playing around with the sounds of the words just as much as he is the sound of the music. It all makes for an interesting listen for sure, though not always a particularly satisfying one.

Among the more traditional sounding songs we get a little blues, a little folk, and a ballad. The two more forward sounding tracks are “Coming Up” which has that obvious Talking Heads feel and “Bogey Music,” which made me realize just how much in common Adam Ant has with Elvis Presley. Those two are probably my favorites from the album.

Overall I can see why critics hated the album at the time of its release, and I can also see why its achieved a cult following over the years too. It’s not for everyone, but I always appreciate when Paul tries something new. It’s always worth at least one good studious listen at least.

Next Time: John Lennon returns to music after a five year hiatus with Double Fantasy.