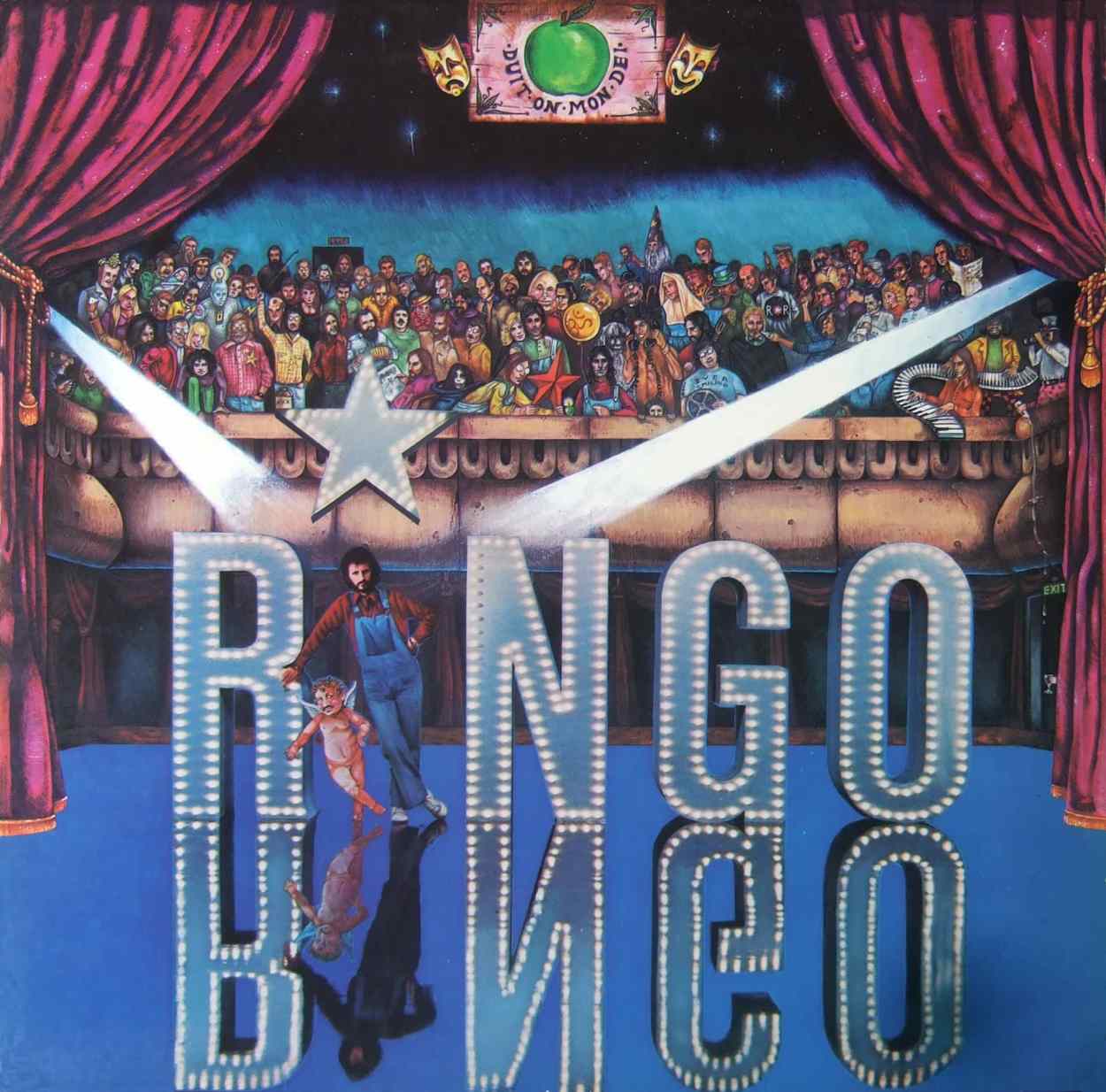 History: While Ringo released the singles “It Don’t Come Easy” and “Backoff Boogaloo” in 1971 and ’72, he chose to focus most of the time period on his acting career. By 1973 he was ready to record again, and he called a huge host of friends to help him, including all three former bandmates, Randy Newman, Marc Bolan, Billy Preston, Harry Nilsson, and Klaus Voorman among many others. Rumors swirled that this album would count as a Beatles reunion, but while George and John do work on one song together, Paul’s song was recorded back in London while the others were in Los Angeles.

My own personal history and initial prediction: Glancing over the tracklist I recognize quite a few of these songs. “Photograph,” “You’re Sixteen,” and “Oh My My” are all familiar to me. Since the tracklist also mentions writing credits, I think it’s something to see all four Beatles represented in different places, so I’m looking forward to hearing some additional Lennon, Harrison, and McCartney songs done in Ringo’s style.

Review: The album starts off with “I’m the Greatest,” a song written by John that manages to feel very much like John’s personality but also fits Ringo’s style as well. Not so much in that it is so boastful but in that it’s also not really taking itself seriously. You can tell they’re just having a whole lot of fun with it. I was smiling the whole time I listened. It’s followed by a Randy Newman number, “Have You Seen My Baby,” which is another fun tune. I didn’t realize the two of them were friends, but I guess I shouldn’t be surprised as Ringo is friends with pretty much everyone. Newman is a better songwriter than he is a performer, so I enjoyed this one too.

Next up is “Photograph” which I feel is one of the more popular Ringo solo numbers. In fact I think Ringo has performed it so often that I may actually be more familiar with some of the live performances than I am with this original version. It’s easy to see why the song has had so much life. The lyrics are the perfect amount of sentimentality without being overly sappy, easily relatable for anyone who has lost someone. It can apply in a romantic sense as well as to another loved one who may have passed away. Musically it’s bouncy and pleasant with a fun guitar solo. It seems pretty clear that Ringo and George worked well together as songwriters, between being such good friends and spending so much time together in the Beatles as well.

The next song is another written by George, “Sunshine Life for Me.” It’s a country number and therefore well suited for Ringo. It’s got a really fun sound and rhythm to it, almost sounding like a sea shanty. It’s followed by “You’re Sixteen,” a cover of a Bobby Darin song that has always made me cringe. The song was originally written in 1960, and it was common in that era to write songs specifically for the teens who were buying your records. Sam Cooke has a very similar song called “Sixteen” that on the surface sounds just as bad but is saved by the line “I was a mere lad of sixteen, I’ve aged a year since then” so you know 100% that the protagonist is age appropriate. This song is much more vague, though it does contain the line “you’re my baby, you’re my pet” which is a pretty gross thing to say regardless of the age of the person you’re singing to. I think it’s a case of times changing and terms being outdated, but this is another one that Ringo often returns to and I personally think he just needs to let it lie. This song also features a really weird “kazoo” vocal by Paul McCartney of all people that is completely out of left field and unnecessary.

Side 2 starts with “Oh My My” a song Ringo co-wrote with Vini Poncia, a musician and songwriter he would continue to work with on future albums, as well as once more here with “Devil Woman.” The song is certainly catchy and can get stuck in your head, but the lyrics are just plain awful. The phrase “Do I havta?” isn’t something to use in regular conversation let alone in a song lyric. It’s certainly very Ringo in that it’s not taking itself seriously, but there’s just so little to the words here, and ridiculously repetitive. It’s probably my least favorite song on the album. “Devil Woman” is a stronger song, but still suffers lyrically in using a lot of obvious rhymes – long with strong, head with bed, etc. Hopefully the two of them will push themselves a little further in the future.

In between these two numbers is “Step Lightly” which Ringo gets the sole credit for. It’s a soft swinging country number that he does well on. Not a strong enough song to be a single, but still good. It’s followed by “Six O’Clock” which was written by Paul and Linda. While John’s contribution felt like something specifically catered to Ringo’s style, this one feels like a song that maybe Paul didn’t think he wanted to include on his own album, so why not, let’s give it to Ringo. Apparently that’s not what happened, but this definitely feels like a Wings b-side to me anyway. Paul’s keyboard part has his signature style all over it.

The album ends with “You and Me (Babe)” a song cowritten by George with the Beatles former roadie and personal assistant Mal Evans. Probably the most notable thing about it is that Ringo ends the song thanking nearly everyone who participated on the album. It turns it from a studio moment to almost like you’ve been listening to a live performance this whole time. It’s a fun little touch to end the album on.

It’s not a secret that Ringo is not a songwriter on the same level as his other former Beatles. I don’t think anyone expected him to put out his own All Things Must Pass post Beatles because it’s just not where his strength lies. But I think this is a great start toward him taking the reins and having a little more control over his music rather than just doing covers or singing words others wrote for him. He’s still finding his footing, and I would question the judgement of including “You’re Sixteen” at all, but overall this is a fun and pleasant album. It’s probably about the closest as we’re going to get to a Beatles reunion at this point as well, and while not quite the perfect union we’d all hope for, it is nice to hear him working with them all in one way or another.

Singles released around this time:

“It Don’t Come Easy” – As I had said previously, this is my favorite of his of the songs I know so far. Just a great blues number. I do wonder if there are multiple versions of it out there, because I feel like I’m not used to all the horns being on the track.

“Early 1970” – What a fun song! I had never heard this one before. Just a fun little diary and loving tribute to his three friends with a little self deprecation at the end of it.

“Back Off Boogaloo” – The term “boogaloo” was apparently heavily inspired by Marc Bolan, Ringo’s good friend and leader of the band T. Rex. That makes a lot of sense. This song certainly isn’t glam rock but it does have a lot of fun to it, and is another that can get in your head pretty easily. A real toe tapper too.

“Blindman” – The b-side to “Back Off Boogaloo,” a failed attempt at writing a theme for a movie Ringo was in at the time. The instrumentation is a bit odd. I’m not a fan.

“Down and Out” – Another decent attempt at an early song for Ringo, a nice bluesy number with very little lyrics. An easily forgotten B-side.

Next Time: Paul and Wings return with Band on the Run, which at least in my mind is their best known work.